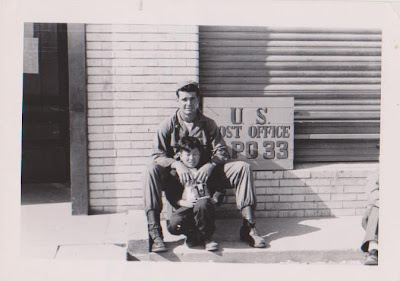 We want to pay tribute to James Garner who died Saturday, July 19 of natural causes. He was known as a Korean war vet, a Hero, a leading actor, and well-respected man. In the above photo, he is pictured with a Korean orphan.

James Garner joined the National Guard serving seven months in the United States. He then went to Korea for 14 months in the Regular Army, serving in the 5th Regimental Combat Team in the Korean War. He was wounded twice. Garner was awarded the Purple Heart in Korea for the first injury. For the second wound, he received a second Purple Heart, although Garner received the medal in 1983, 32 years after his injury. Garner was a self-described “scrounger” for his company in Korea, a role he later played in The Great Escape and The Americanization of Emily.  He is well known for his roles in Maverick, The Rockford Files, The Great Escape and more recently, The Notebook.

For his contribution to the film and television industry, Garner received a star on the Hollywood Walk of Fame (at 6927 Hollywood Boulevard). In 1990, he was inducted into the Western Performers Hall of Fame at the National Cowboy & Western Heritage Museum in Oklahoma City, Oklahoma. He was also inducted into the Television Hall of Fame that same year. In February 2005, he received the Screen Actors Guild’s Lifetime Achievement Award. He was also nominated for Outstanding Performance by a Male Actor in a Supporting Role that year, for The Notebook. When Morgan Freeman won that prize for his work in Million Dollar Baby, he led the audience in a sing-along of the original Maverick theme song, written by David Buttolph and Paul Francis Webster. In 2010, the Television Critics Association gave Garner its annual Career Achievement Award. On April 21, 2006, a 10-foot-tall bronze statue of Garner as Bret Maverick was unveiled in Garner’s hometown of Norman, Oklahoma, with Garner present at the ceremony.

James Garner and his achievements left a footprint on anyone who has seen his work but more importantly he should be recognized for his service to his country.  THANK YOU HERO for all you did in your life.

The following link is a very nicely written article by the NY Times: http://www.nytimes.com/2014/07/21/movies/james-garner-actor-dies-at-86.html?_r=0