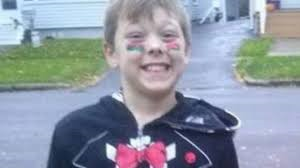 Our first HERO of the week:

Our very own Tyler Doohan

FAIRPORT, N.Y. (AP) — Local firefighters have adopted as one of their own a 9-year-old boy who died saving six relatives from a fire that destroyed his grandfather’s upstate New York home.

A stream of cars and fire vehicles made its way Wednesday to St. John of Rochester Catholic Church for a funeral service for Tyler Doohan. The boy died trying to rescue his grandfather, who also died, along with another relative.

Tyler’s mother, Crystal Vrooman, said her son was a “sweet boy” whose sense of humor made everyone smile.

“I wish you were here for me to hold you one more time,” Vrooman said, choking back tears. “Rest in peace my beautiful angel. You’re a hero, baby. You made me the proudest mother I could be.”

The boy’s heroism touched hearts across the country and among the mourners were members of the basketball team at Silver Lake College of the Holy Family in Manitowoc, Wis., who served as pallbearers.

Clad in dress blues and white gloves, firefighters from departments around the Rochester area and as far away as Buffalo lined the walls of the church lobby, according to The Rochester Democrat and Chronicle reports (http://goo.gl/CWIqbV). Outside, fire engines lined the streets and firefighters directed traffic.

At the church entrance, Penfield Fire Chief Chris Ebmeyer held a red-and-white helmet with a shield bearing Tyler’s name, which he gave to the boy’s mother. “We consider him an honorary firefighter,” Ebmeyer said.

The Wisconsin basketball players traveled through the night to take part in the service, their coach said.

“The players were taken with the story,” Silver Lake College coach Phil Budervic said. “Our core values are compassion and community and we teach them that compassion has no limits and community has no boundaries. They looked at this as if it happened next door.”

Tyler died in the early morning of Jan. 20 as fire destroyed a single-wide trailer in Penfield. His grandfather, Stephen Smith, 54, and step great-grandfather Lewis Beach, 63, also died in the blaze. Tyler was off from school in observance of Martin Luther King Jr. Day, and had asked his mother the previous night to sleep at his grandfather’s residence.

As the fire spread, Tyler woke six people, including two other children. They all escaped. When Tyler went back into the trailer to help his grandfather, who used a wheelchair, he never made it back out as all three perished.

An electrical problem is thought to have started the fire. Fire officials said the trailer was not equipped with a fire alarm.
___